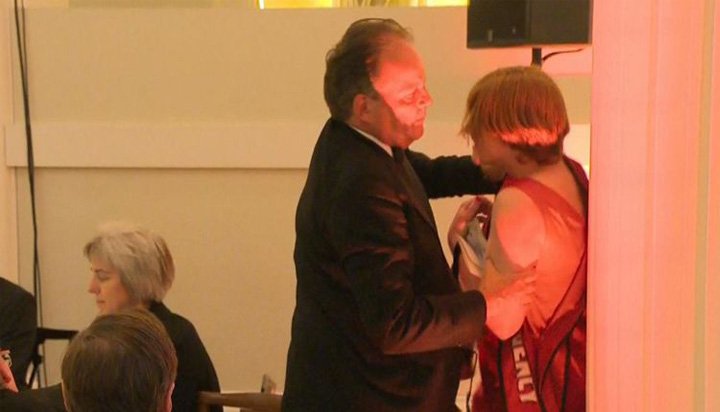 Foreign Office Minister Mark Field has been suspended after grabbing and pushing a female climate change protester out of an event.

Footage shows the minister holding the protester around the neck against a pillar while marching her out of a dinner at Mansion House where Chancellor Philip Hammond was delivering his annual speech about the state of the UK economy.

Around 40 Greenpeace protesters “gatecrashed” the event in the City of London and had to be removed by security but no one was arrested.

The environmental group said it has a “proud history” of peaceful protest and last night’s protesters were there “peacefully”.

In a statement to ITV News, Mr Field claimed he reacted “instinctively” when the woman rushed past him and “many guests understandably felt threatened”.

The Tory MP referred himself to the Cabinet Office for an investigation and apologised to the woman for “grabbing her” but was worried “she might have been armed”.

He added: “I deeply regret this episode and unreservedly apologise to the lady concerned for grabbing her but in the current climate I felt I needed to act decisively to close down the threat to the safety of those present.”

Greenpeace tweeted: “We have a simple and clear message to the Treasury and the banks who continue to fund fossil fuel companies – Business as usual is not acceptable – we are in a #ClimateEmergency – and we need to act like it!”

In a statement about the activist, it added: “She’s had a good sleep and is going fine. We’re looking after her. Thanks so much for your love and concern everyone. We’re sharing positive messages with her.”