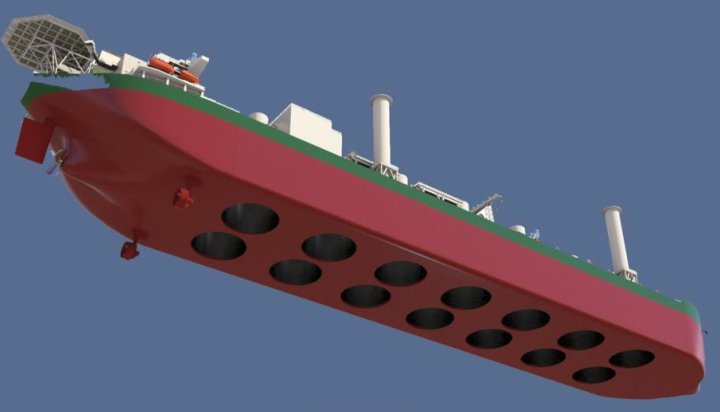 ShipEco Marine Limited says the answer is yes – it suggests that around a hundred vessels of this kind are currently retired every year – they are frequently then run aground off the Bangladesh coast before being cut up for scrap metal.

However, the firm has an innovative solution to repurpose the ships and produce renewable electricity.

It says by cutting circular holes in the bottom of ships’ hulls, ‘watertight silos’ could be built inside, which could then be compressed like a piston by waves below.

The increase in air pressure would then turn turbines fitted horizontally over the top of these shafts, which could in turn be used to run electrical generators.

The firm says laboratory tests have shown the concept is feasible and notes the technology could prove more effective than more typical forms of marine energy as the strongest waves are generally found further out at sea, where winds are more powerful.

It suggests the electricity generated could be used to produce fresh water, hydrogen or liquid nitrogen, which could be stored elsewhere on the ship before being brought ashore.

Andrew J. Deaner, who created the original design, said: “WaveShips will use the world’s natural ocean energy to create major public utilities in a clean efficient way, for everyone to live, in a sustainable world for ALL future generations – true global sustainability.”