The Labour Party says even if progress continues at its current rate, the goal will be missed by nearly 50 years 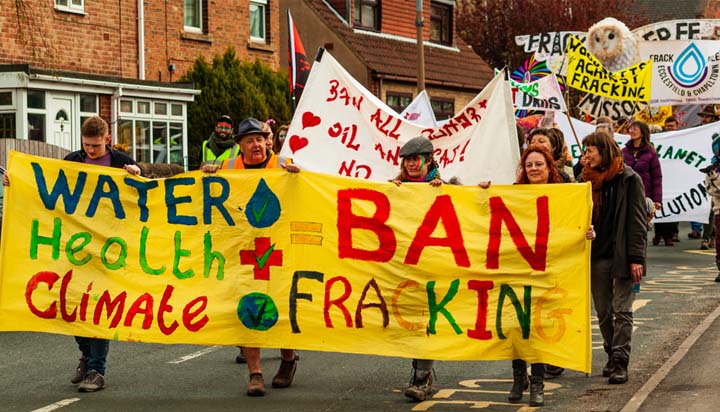 Labour Leader Jeremy Corbyn is urging Boris Johnson to ban fracking in Britain as it will make it “impossible” to meet the target of net zero emissions by 2050.

The call comes as an analysis by Labour reveals if the UK fully exploits its shale gas reserves, the amount of carbon released would eliminate any hope of the government meeting its 2050 carbon target.

The party adds even if progress continues at its current rate, the goal will be missed by nearly 50 years.

Mr Corbyn, who is joining anti-fracking protesters at Cuadrilla’s Preston New Road site in Lancashire today, is also calling on the new prime minister to “stand up to big business interests” and accuses him of “bending the knee” to companies who want to profit from fracking.

He said: “We need urgent action to tackle the climate emergency and that means the prime minister immediately banning fracking once and for all.

“Instead of bending the knee to a few corporations who profit from extracting fossil fuels from the ground, we need to change course now. It’s the next generation and the world’s poorest who will pay the price if this Conservative Government continues to put the interests of a few polluters ahead of people.

“Tackling the climate emergency cannot be left to the free market. Labour will ban fracking and our Green Industrial Revolution will face the climate emergency head-on and leave no community behind, transforming our country’s energy supply and creating 400,000 good, well-paid jobs across the country.”

The Labour leader adds newly-appointed Business and Energy Secretary Andrea Leadsom is a vocal supporter of fracking, who previously urged voters to ignore the “scaremongering” of fracking opponents.

A BEIS spokesperson said: “Independent climate experts have recognised that natural gas has a role to play as we meet our 2050 net zero emissions target—now firmly set in law.

“Exploring the potential of a new domestic energy source is not only compatible with these world-leading climate goals, it could also deliver substantial economic benefits, through the creation of well paid, high-quality jobs.”