Carbon pricing after Brexit – what might it mean for UK energy users?

The Department for Business, Energy and Industrial Strategy (BEIS) is planning for the future of carbon pricing in a no-deal Brexit. 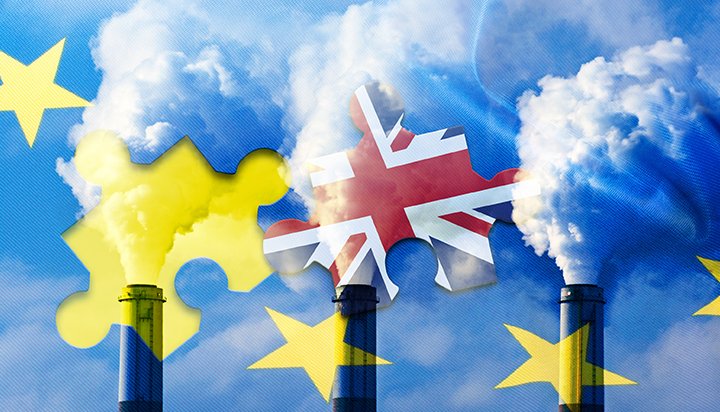 The Department for Business, Energy and Industrial Strategy (BEIS) is planning for the future of carbon pricing in a no-deal Brexit. Under these circumstances, the UK would cease to participate in the EU Emissions Trading System (EU ETS), and BEIS would replace emissions trading in the UK with a fixed rate tax, called the Carbon Emissions Tax.

The tax would apply to the same existing participants in the EU ETS. The EU ETS caps emissions within high-carbon sectors and permits the trade of emissions allowances between participants to create a floating carbon price. The Carbon Emissions Tax would instead be a fixed rate initially set at £16 per tonne. Participants with permits under the EU ETS would continue to receive a tax allowance. They would continue to report their emissions under existing monitoring, reporting and verification (MRV) requirements, and pay the tax for emissions beyond those within their allowance. This allowance would be based on the EU ETS Phase III free allocations for the remainder of the phase (ending in December 2020).

What will be the total price on carbon?

Carbon pricing in the UK also includes the Carbon Price Support (CPS) – an additional rate levied on the power generation sector and currently set at £18 per tonne. When combined with the Carbon Emissions Tax, the effective carbon price on the power sector would be £34 per tonne for emissions. Since 2013, power generators have received zero free allowances in the EU ETS, meaning the EU ETS allowance price, its potential Carbon Emissions Tax successor, and the Carbon Price Support apply to every tonne of carbon emitted by power generators. This price strongly influences final electricity commodity costs and is an important reason why the UK cut its emissions from coal-fired power generation by 80% from 2012 to 2016.

How will the Carbon Emissions Tax affect decarbonisation?

It is generally considered that an EU ETS carbon price above €30 per tonne incentivises meaningful decarbonisation. While the Carbon Emissions Tax and the CPS clearly exceed this level in combination, they only impact the power generation sector rather than all sectors subject to carbon pricing. The Carbon Emissions Tax is a set rate, unlike the floating rate of the market-based EU ETS. Carbon prices under the EU ETS have persisted above €20 per tonne in 2019, with €25 per tonne more typical of recent months. These are well above the Carbon Emissions Tax. EU ETS allowance prices could fall, however, if their market is subject to a change in regulation that affects how much it is driven by, and possibly inflated by, speculation. The UK also relies on other policies for decarbonisation beyond carbon pricing and has already cut its emissions further on a per-capita basis than any other G7 country.

The new arrangements would continue to make use of several EU ETS mechanisms, reducing the shock of a transition. However, a key difference should be noted. The EU ETS has covered aviation emissions since 2012, while the Carbon Emissions Tax would not. Aviation accounts for roughly 3% of the EU’s emissions. Globally, the aviation sector is expected to grow by 300-700% by 2050. There are recent concerns from the International Council on Clean Transportation that its growth is being underestimated.

How will the Carbon Emissions Tax affect energy users?

The initial rate of £16 per tonne will be reviewed and possibly changed in 2020, making a long-term assessment difficult. However, the fixed rate should bring increased predictability to carbon pricing and reduce uncertainty for power generators. This, combined with the current overall lower price on carbon compared with the EU ETS, should lower commodity costs.

Need to know more? Listen to Alfa Energy’s Podcast, What will happen to UK carbon pricing after Brexit? here!
Jeremy Nicholson, Corporate Affairs Officer, discusses carbon pricing in a no-deal Brexit and what this may mean for energy buyers with Nick Fedson, Carbon Compliance Analyst.

To stay current, you can subscribe to our regular market intelligence reports and briefings here.