GUEST BLOG: What the world’s biggest crane is doing for nuclear power in the UK 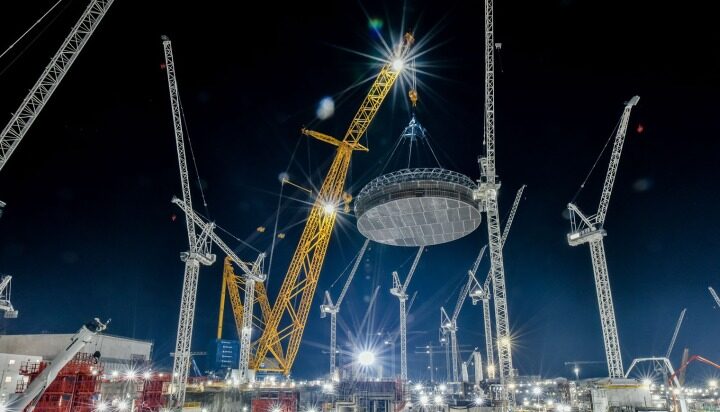 The Hinkley Point C (HPC) nuclear power station was first proposed in 2010 alongside a series of other nuclear projects in the UK, and it’s a project that has been in construction for several years now. We’re seeing nuclear power on the rise in many parts of the world due to its low environmental impact in comparison to other energy sources and it’s an area that Sarens has become quite involved in over the last several years.

Sarens was contracted for the heavy lifts required for the construction process by Bylor, a joint venture project by Bouygues Travaux and Laing O´Rourke that has been delivering the main civil engineering works at HPC, also erecting 50 of their own tower cranes for construction. Our team expects to remain onsite with the SGC-250 until the completion of the plant in 2026.

Sarens began work onsite at Hinkley Point C in 2019 utilizing our SGC-250, which is the world’s largest crane, designed and built in house at our HQ in Belgium. This particular model was released to the market in 2018 and was developed to lift the world’s heaviest components and structures. There are four cranes in the SGC series, which have load moments ranging from 99.000Tm to 250.000Tm.

After studying the market, we found an ever-increasing need for cranes with extremely heavy lifting capacities. The SGC-250 and other SGC cranes were designed to meet the needs of our clients for future projects inside of the various sectors where we’ve been heavily involved in and as our engineers were seeing heavier materials being developed for as technology advances and allows for this to be possible.

The SGC-250 crane was selected for the Hinkley Point C plant due to the kinds of lifts required and for its capacity of 5.000T, as the lifting loads range from precast concrete elements to pipe sections and heavy machinery. The crane, which we’ve dubbed “Big Carl,” is scheduled to make over 700 total lifts as part of the project, including the lifting the massive dome of the plant.

In these critical projects at refineries and power plants all over the world, one of the biggest challenges we see ourselves facing apart from the lifts scheduled for the crane, is the physical transportation of the crane to the construction site. Coming from Sarens’ headquarters in Belgium in this case, the SGC-250 was transported in pieces via ship, and required over 400 deliveries by our team to transport all pieces to Somerset. Once we got the crane onsite, it was then assembled over a 10 week period.

Throughout the project, we’ll also need to move the crane to different areas around the construction site, which is why the crane was specifically designed to have a flexible and dynamic set of wheels to allow of 360° slewing and travel even when fully rigged. This will greatly increase our efficiency while performing lifts over the next 5 years and is one of the most unique features of the SGC cranes.

Early last year, the SGC-250 completed its first lift of many at the power plant and remains onsite at the project, as the UK comes closer to its goal of providing low carbon electricity to meet 7% of energy demand via nuclear power. The HPC plant is expected to operate for up to 60 years and provide 6 million local homes with power during that time, while also offsetting 9 million tons of carbon dioxide a year, and Sarens is very proud to be part of the construction of the first nuclear power station erected in the Uk in over 20 years.

Carl Sarens is the Director of Technical Solutions, Projects & Engineering at Sarens.