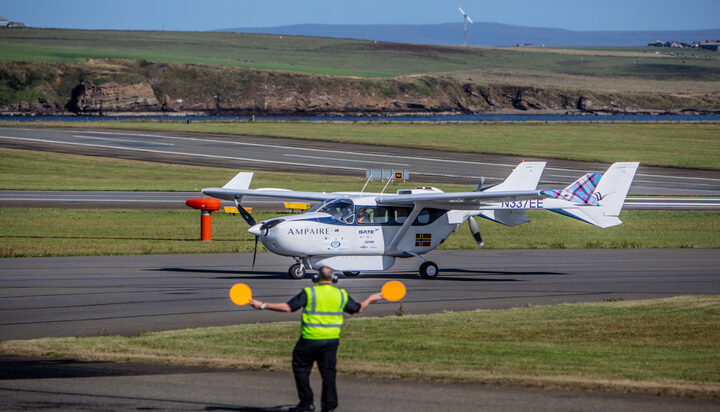 A hybrid-electric aircraft took off from Kirkwall Airport in Scotland in a bid to become the prototype for regional airlines’ efforts to decarbonise their operations.

Running on a battery and a conventional combustion engine, the six-seater Cessna 337 travelled to Wick John O’Groats Airport in the north of mainland Scotland.

The aircraft, developed by the hybrid-electric powertrain developer Ampaire, is the first of a line of jet systems that aim to reduce carbon dioxide emissions and operating costs by 25%.

The flight of the hybrid-electric aircraft is part of the Sustainable Aviation Test Environment (SATE) project, which is being led by Highlands and Islands Airports Limited.

Funded by UK Research and Innovation, SATE is based at Kirkwall Airport in Orkney, which is also home to the UK’s first low carbon aviation test centre.

“It’s a model for what Ampaire will be able to offer regional carriers everywhere. With carbon dioxide emissions rising 70% faster than predicted, transition to zero emission technology is critical. We’re pleased to be taking a big step in that direction here in Scotland.”

Graeme Dey, Scottish Government Minister for Transport commented: “The Kirkwall test centre and companies such as Ampaire put Scotland at the forefront of the transition to low carbon aviation.

“These demo flights are an important step towards delivering our commitment to decarbonise scheduled passenger flights within Scotland by 2040.”