Edinburgh already outstrips other Scottish cities by having more trees per head of population, with more than 730,000 urban trees compared to around 519,000 residents 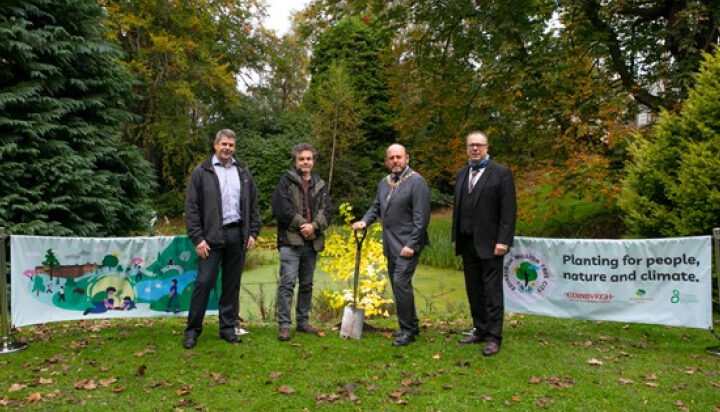 Image: The City of Edinburgh Council

Edinburgh has announced its ambitious target to become a Million Tree City by 2030 as part of its commitment for net zero emissions by the end of the decade.

The Edinburgh Million Tree Forum has been established, made up of representatives from council services, the Edinburgh and Lothians Greenspace Trust, the Woodland Trust, the Royal Botanic Garden Edinburgh, Trees of Edinburgh, the Scottish Wildlife Trust, the Trust for Conservation Volunteers and the Edinburgh Living Landscape Initiative.

Lord Povost Frank Ross was joined by representatives from the Forum to plant a gingko tree on Wednesday in the grounds of Lauriston Castle, following which a tour was taken and a further two trees were planted.

According to the City of Edinburgh Council, Edinburgh already outstrips other Scottish cities by having more trees per head of population.

There are currently more than 730,000 urban trees compared to around 519,000 residents, with the move to increase the number of trees expected to help Edinburgh lessen the impacts of climate change by providing cooling in heatwaves, surface water management for heavy rainfall as well as around carbon storage and a home for wildlife.

Woodland Trust has contributed a grant of £298,055 from its Emergency Tree Fund to support the delivery of the project.

Edinburgh’s Lord Provost Frank Ross said: “We may have more trees in our city than people but to get to our city’s 2030 net zero target, we must plant more.

“Climate change will impact on all of us and we all need to play our part to mitigate the effects. A key aspect of the proposed Climate Strategy is for us all to build upon our previous efforts and Edinburgh Million Tree City Project offers us all the opportunity to do just this.

“This is not a project for the council, it is a project for our city, our communities and for us as citizens, with a shared ambition for Edinburgh to have at least one million trees by 2030.”