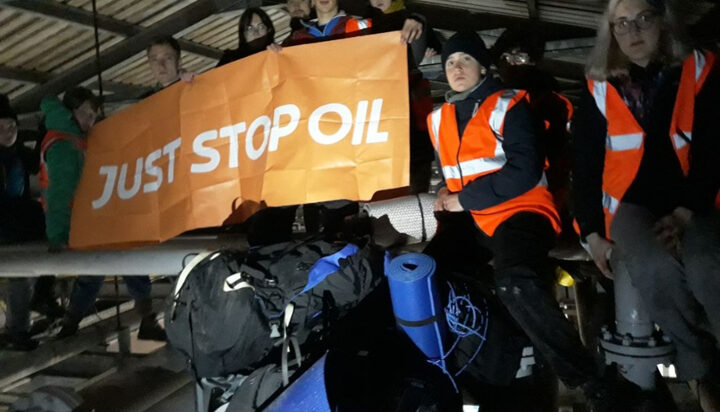 A number of activists were arrested following a protest which blockaded an oil terminal in Glasgow.

Nearly 40 campaigners from Just Stop Oil arrived 4am yesterday, closing up the entrance to the Nustar Clydebank oil facility in West Dunbartonshire.

It follows another protest last week during which an activist covered the BEIS building with orange paint in protest against burning biomass.

The activists said their protest aims to urge the government to stop funding new oil and gas projects.

Chief Superintendent Lynn Ratcliff said: “As a rights-based organisation, Police Scotland puts our values of integrity, fairness, respect and a commitment to upholding human rights at the heart of everything we do.

“This means that we will protect the rights of people who wish to peacefully protest or counter-protest, balanced against the rights of the wider community.

“We have considered the impact of the protest in terms of health and safety within the site and the impact on the wider community and have asked the individuals involved to end their protest and allow a return to normality.

“The incident is currently ongoing and a number of people who decided not to cooperate have subsequently been arrested.’’