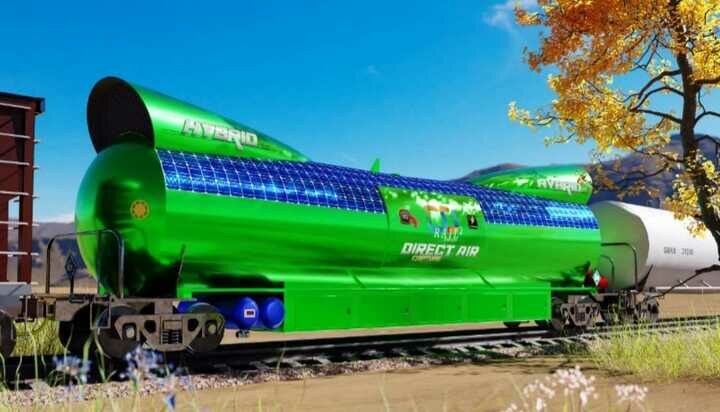 Station masters in the UK could soon blow their whistle for trains to depart for ‘cleaner’ journeys.

Engineers from the University of Sheffield have worked with the US startup CO2Rail Company to develop a direct air capture (DAC) system that could be installed in carriages of existing trains.

The train carriage technology is designed to capture air and then, through a chemical process, separate carbon dioxide.

The carbon dioxide will then be stored in a liquid reservoir until it can be emptied from the train at a crew change or fuelling stop into normal carbon rail tank cars.

The team behind the development said the system eliminates the need for external energy input as it will harness the energy produced by the braking manoeuvre of the train.

The research found that on average, each complete train braking manoeuvre generates enough energy to power 20 homes for an entire day.

Scientists said that unlike stationary DAC operations, which require large areas of land to build equipment and to construct renewable sources of energy to power them, the CO2Rail system would not need permanent infrastructure and would be unseen by the public.

Co-Author of the research, Professor Peter Styring from the university’s Department of Chemical and Biological Engineering and Director of the UK Centre for Carbon Dioxide Utilization, said: “The technology will harvest meaningful quantities of carbon dioxide at far lower costs and has the potential to reach annual productivity of 0.45 gigatonnes (Gt) by 2030, 2.9Gt by 2050, and 7.8Gt by 2075 with each car having an annual capacity of 3,000 tonnes of carbon dioxide in the near term.”