He said he was ‘extremely concerned’ about the ‘serious situation’ at Europe’s largest nuclear plant, which he warned could threaten public health and the environment in Ukraine and beyond 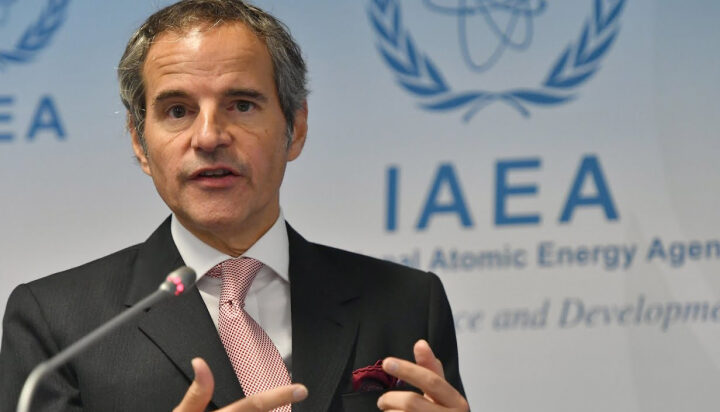 The UN’s nuclear watchdog has warned about the “very real risk of a nuclear disaster” due to shelling at the Zaporizhzya nuclear power plant in Ukraine.

Rafael Mariano Grossi, Director General of the International Atomic Energy Agency (IAEA) said he was “extremely concerned” about the “serious situation” at Europe’s largest nuclear plant, which he warned could threaten public health and the environment in Ukraine and beyond.

Ukraine reported that while there has been no damage to the reactors and no radiological release, there is damage elsewhere on the site, which includes the plant’s external power supply system, although two power lines remained operational.

It has also triggered the emergency protection system of one of the plant’s three operating reactors, with the unit disconnected from the grid.

In addition, the shelling has damaged a nitrogen-oxygen station – which supports the plant’s operations – and an auxiliary building.

Mr Grossi added the Ukrainian staff operating at the plant under Russian troops must be able to carry out their important duties “without threats or pressure” undermining not only their own safety but also that of the facility.

The IAEA chief said: “Military action jeopardising the safety and security of the Zaporizhzya nuclear power plant is completely unacceptable and must be avoided at all costs.

“Any military firepower directed at or from the facility would amount to playing with fire, with potentially catastrophic consequences.

“I strongly and urgently appeal to all parties to exercise the utmost restraint in the vicinity of this important nuclear facility, with its six reactors. And I condemn any violent acts carried out at or near the Zaporizhzya nuclear power plant or against its staff.”

The ⁦@iaeaorg⁩ team must go to Zaporizhia just as we did to Chornobyl and South Ukraine earlier in the year. We can put together a safety, security and safeguards mission and deliver the indispensable assistance and impartial assessment that is needed. pic.twitter.com/yc4ZWyknJt

He insists the IAEA team must go to the Zaporizhzya nuclear plant, as they did to Chornobyl and South Ukraine earlier in the year, to put together a “safety, security and safeguards mission”.