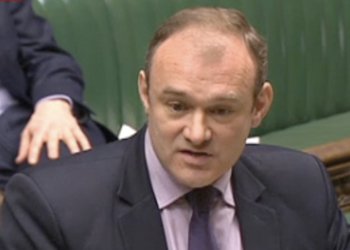 Mr Davey introduced the much-delayed Energy Bill at a Parliamentary session and said the Bill would see consumers pay less for energy in the long run.

He stressed the new legislation will protect consumers, keep the lights on and help the UK’s transition towards a low-carbon future. In a statement released today, DECC said the Government’s energy policy would cut the average household bill by 7% or £94 by 2020 than it would be without low-carbon energy policies being pursued.

Mr Davey said: “The net effect of Government policy on energy bills is downwards not upwards… High energy bills can put huge pressure on households and businesses. So let me be very clear, especially given recent misleading reports in the media: Government policy is designed specifically to reduce consumer bills. Of course we can’t control global commodity markets. But we can and will put consumers in control by driving a wedge between wholesale energy prices and consumer bills. That’s why we propose to legislate in the Energy Bill to ensure that consumers are placed on the cheapest tariff that meets their preferences.”

He said energy suppliers will be pushed to make switching easier and quicker and the Government will continue to place energy efficiency at the forefront to help cut bills. He also said vulnerable households will get help, with more than a million low-income pensioners expected to get £130 off their fuel bills this winter.

The UK electricity sector needs around £110 billion worth of investment within the next decade and Mr Davey stressed a diverse mix of energy sources is vital.

He said: “The Energy Bill will attract investment to bring about a once in a generation transformation of our electricity market, moving from predominantly a fossil-fuel to a diverse low-carbon generation mix… The Bill will support the construction of a diverse mix of renewables, new nuclear, gas and CCS, protecting our economy from energy shortfalls and significantly decarbonising our electricity supply by the 2030s as part of global efforts to tackle climate change.

“In an era of rising global energy prices, by shifting to more home grown sources of power and by becoming more energy efficient, we can cushion our economy and households from the fluctuations of world gas markets. We intend to underpin this with reforms to the retail market to simplify tariffs and make sure consumers are able to get the best deal for them.”

Other proposals set out today include the Contracts for Difference (CfD) mechanism, which is a long-term plan for stable and predictable incentives for businesses to invest in low carbon electricity generation. A new Government-owned company will act as a single counterparty to the CfDs.

A Capacity Market will also be introduced to provide an insurance policy against future supply shortages and an Emissions Performance Standard to ensure new coal plants can only be built with carbon capture and storage (CCS) technology.

The legislation gives ministers the authority to boost investment in green power from £2.35bn a year to £7.6bn in 2020. The UK’s low-carbon sector currently takes a £122 billion share of the global market worth £3.3 trillion.