A wind farm off the coast of Aberdeen which has been criticised by US tycoon Donald Trump was given approval by the Scottish Government today. The 11 turbines which will […] 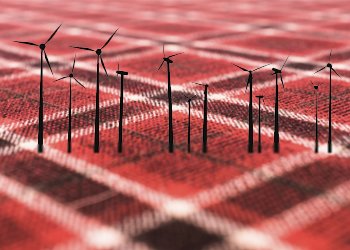 A wind farm off the coast of Aberdeen which has been criticised by US tycoon Donald Trump was given approval by the Scottish Government today.

The 11 turbines which will be used for European research were opposed by Trump on the grounds they would obscure the sea view of his nearby golf course.

There was roughly three times more public support for the project, suggest the number of public representations the Scottish Government received, with 465 in support of the proposal versus 148 objections.

The European Offshore Wind Deployment Centre (EOWDC) in Aberdeen Bay will be between two and 4.5 km off the Aberdeenshire coast. The turbines could generate up to 100 MW, enough energy to meet the needs of over 49,000 homes or almost half of the homes in Aberdeen, which until recently has mainly been a big oil centre.

At the Centre, offshore wind developers and supply chain companies will test cutting edge wind technology in an offshore environment, which should cut the costs of rolling out turbines commercially.

Scotland’s Energy Minister Fergus Ewing said: “The Scottish Government is committed to the successful and sustainable development of an offshore wind sector, which could lead to a potential generation of over £7 billion to Scotland’s economy and support up to 28,000 direct jobs and a further 20,000 indirect jobs by 2020.”

Dr Sam Gardner, Senior Climate Change Policy Officer at WWF Scotland said: “Giving the go-ahead to this off-shore wind test centre is the right decision, demonstrating that no amount of bluster from US billionaires such as Donald Trump will hold Scotland back from becoming a cleaner, greener, job creating nation.”  However, the Scottish Government needs to show the same level of leadership it has on renewables when it comes to reducing our reliance on fossil fuels in the housing and transport sectors.”