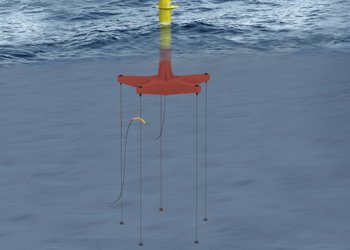 The futuristic prospect of a floating offshore wind farm off Britain’s coast took another step closer to reality today as the Energy Technologies Institute (ETI) picked a designer to make a prototype.

Called the PelaStar, the floating platform will be moored with a ‘tension leg platform’ (TLP) inspired by those commonly used in offshore oil and gas platforms. Once built, it will be used to test the technology for eight to 10 years.

After this £4m trial run, the ETI will decide whether to pump £21m into building it so the floating turbine could be in the water by as early as 2015.

The UK has over a third of the total European potential offshore wind resource – enough to power the country nearly three times over. Offshore wind power is more expensive than onshore  and the ETI believes a floating platform could end up being cheaper.

The group’s studies have shown that floating wind farms in areas of increased higher wind speeds – off the coast of South West England and North West & North East Scotland – have the potential to significantly reduce offshore energy cost. They would stand in water depths of 60m to 100m.

Andrew Scott, Programme Manager for Offshore Wind at ETI said: “The ability of large floating turbines to access near-to-shore, high wind speed sites off the coast of the UK could bring down the cost of electricity generation for the long term, helping to ensure that low carbon energy from offshore wind achieves costs comparable with other forms of low carbon generation.”