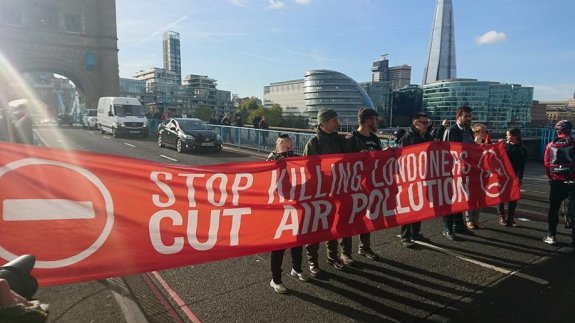 Seven people were arrested yesterday after blocking Tower Bridge in a protest against London’s air pollution.

The Stop Killing Londoners: Cut Air Pollution Campaign’s “civil disobedience” marks the start of a week of action – it closed the bridge for more than an hour and caused gridlock across the city.

It aimed to highlight what the group says are toxic and unlawful levels of nitrogen dioxide and particulate matter in the air, which are estimated to be killing around 9,500 Londoners each year.

Activists have sent their demands to the government and Sadiq Khan and say they will continue peaceful action until they receive a satisfactory response.

Stu Basden, one of the campaigners arrested, said: “We felt that we had no choice but to escalate our action today. Children are suffering from stunted lungs and people are dying early deaths from diseases such as asthma, bronchitis, emphysema and cancer.

“We are deeply sorry for any inconvenience we have caused and hope that people can understand the bigger picture.”