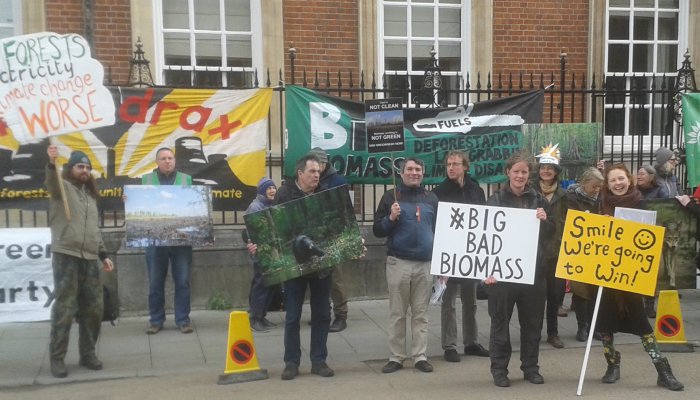 Drax has been hit by a double environmental protest today at its Annual General Meeting (AGM) in York and at Peel Port in Liverpool, where it receives its wooden biomass fuel pellets.

The owner of the formerly coal-fired Drax Power Station in Yorkshire, which now runs 70% on imported biomass, was targeted by environmentalists that believe its new fuel source can be as as bad as or worse for the environment than coal and say it shouldn’t be classed as renewable energy.

The demonstrators claim Drax uses public money through subsidies and contributes to climate change rather than mitigating it.

The protests were organised by groups including Biofuelwatch, the Coal Action Network and Liverpool Earth First.

Natalie Bennett, former Leader of the Green Party of England and Wales, said: “Drax is a textbook case of how not to do electricity generation.

We are subsidising at significant cost a technology that relies on environmental destruction, of American forests being turned into fuel that is shipped halfway around the world, when we should be looking to solar, wind and tidal power, where the ‘fuel’ is free and its use genuinely environmentally friendly – plus the great Cinderella of energy policy, energy efficiency.”

A Drax spokesperson said: “As a result of sustainable forest management, trees are growing faster than they are being harvested in the US south, resulting in a net decrease of carbon in the atmosphere.

“Taking into account the entire supply chain, using biomass for power generation delivers carbon savings of more than 80% compared with using coal. Lifecycle emissions for biomass are lower due to the amount of carbon absorbed by growing trees, planted to replace those harvested from sustainable working forests.”