One UK recycling company is said to have exported more than 50,000 metric tonnes of plastic waste to Malaysia over the past two years 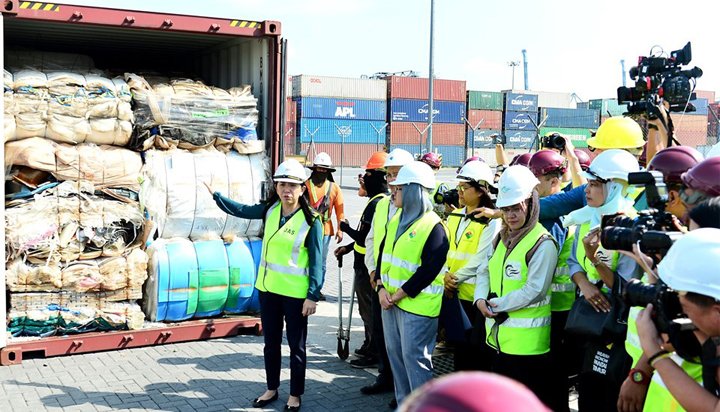 The Malaysian Government has ordered several thousand tonnes of imported plastic waste to be sent back to the countries it came from, including the UK and US.

Environment Minister Yeo Bee Yin said Malaysia, along with many other developing countries, have become a dumping ground for rich nations, with much of the waste brought in illegally.

The Ministry of Energy, Science, Technology, Environment and Climate Change (MESTECC) will initially be shipping back 450 metric tonnes of contaminated plastic waste in 10 containers to countries including Australia, Bangladesh, Canada, China, Japan, Saudi Arabia and the US.

It added the containers are filled with low quality, non-recyclable plastic waste and routed to processing facilities that do not have the technology to recycle “in an environmentally sound manner”.

A total of 3,000 metric tonnes of plastic waste from 60 containers are also expected to be shipped back to the originating countries once they are fully inspected.

Ms Yin said: “What the citizens of the UK believe they send for recycling is actually being dumped in our country.

“If they ship to Malaysia, we will return it back without mercy… Malaysians, like any other developing countries, have the right to clean air, clean water, sustainable resources and a clean environment to live in, just like citizens of developed nations.”

She added: “We found out that one recycling company in UK has exported more than 50,000 metric tonnes of plastic waste in about 1,000 containers for the past two years. We urge the developed countries to review their management of plastic waste and stop shipping the garbage our to the developing countries.”

The UK’s Environment Agency said its officers carry out “pro-active and intelligence led” inspections to stop waste shipments that breach the regulations before they leave the ports – but there are a small number of businesses “that intentionally break the rules”.

A spokesperson added: “The UK is committed to tackling illegal waste exports, which is why individuals found to be exporting incorrectly described waste can face a two-year jail term or an unlimited fine.

“We are yet to receive a formal request from the Malaysian Authorities to repatriate any English waste but discussions are ongoing to find ways to strengthen UK waste export management.”