Winter is Coming – What Energy Users Can Expect

The start of the winter energy season is less than two weeks away and with it comes enhanced volatility. 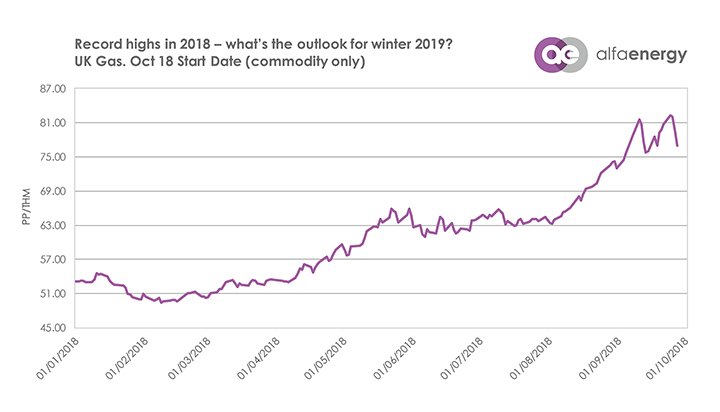 The start of the winter energy season is less than two weeks away and with it comes enhanced volatility. One key metric is the return of LDZ (domestic heating demand) as a barometer of UK and European gas demand. Temperature movements in either direction can cause big shifts in residential demand. Information relating to supply, demand, storage levels, nuclear availability and LNG imports are of great significance in the winter months, and with it an increased risk of short-term price spikes and ensuing panic buying!

The run up to 1st October normally brings increased volatility. Not only is it the start of winter period, but also the ‘October round’ where traditionally energy buyers for large industrial and commercial users would look to fix their energy contracts. Energy buying has evolved over recent years from just fixing once a year to more a dynamic way of purchasing (risk managed products) so the October round effect on pricing is declining.

Last year in the run up to winter we saw the price (see chart above) of a twelve-month gas contract (1st October start) surge to a contract high of 82p/therm. Prior to September the average price of said contract was 58p/Thm, September averaged 78p/therm – an increase of 34%. There were several fundamental issues at that time that also contributed to the bullishness, however a look back in time will show several instances of September rallying without just cause, so this was no surprise.

In the wider commodity market:

Fast forward twelve months: coal, oil, gas and power markets had been drifting lower on a raft of bearish drivers, including but not limited to record EU gas storage, renewable growth, a ramp up in Atlantic basin cargo arrivals, softer coal and crudes and falling industrial demand exacerbated by global market concerns. It seemed likely we would head into the winter with front month gas at prices last observed in 2016-17. The absolute bottom this summer saw month-ahead hit a ten-year low on 26th June. These drivers gave the impression it would be one of the most bearish winters of recent years.

Then came a trifecta of bullish news on Tuesday 10th September, which reverberated across European gas and power markets. The bulls seized the opportunity to lift prices from the floor resulting in a +20% upside on front month and around 10% on seasonal contracts.

Then, on Sunday 15th September, a drone/missile attack on Abqaiq, the world’s largest crude processing facility in Saudi Arabia, removed 5.7Mbpd of supply from global markets and saw crude oil jump +14.6%, the largest one day percentage rise on record.

Barring that week’s events, 2019 had been in complete contrast to last year in terms of supply demand fundamentals. Geopolitical risk has increased as a result of ongoing trade spats (US/China) and US sanctions on Iran/Venezuela, as well as a potential hard Brexit looming in the UK. The effects on global demand will continue to spread to the wider energy complex. Weak global manufacturing PMI data indicate falling production, while the most recent Chinese economic data was amongst the weakest observed in the last twenty years.

What does this mean for me – and where will the market go next?

There is still chance for a plethora of supply disruptions to materialise, but at present the chances of similar upside to last year are questionable. The latest weather models forecast a warmer remainder of September with October, November also looking milder than normal. If the status quo persists across power, gas and related fuels, the levels of volatility observed in 2018 will not be repeated. The key word here is ‘IF’. There is still plenty of time for the current situation to change but as things stand, we go into winter 2019-20 in a much better position than last year. Even at time of writing all the upside of a very difficult week has nearly unwound. Saudi Arabia expects to return to pre attack production levels within two weeks. Extant obligations have been met from storage, Russian gas exports are back to pre-Opal restriction levels after some re-routing, and EDF has released a statement saying they are confident affected reactors do not need to be taken offline.

These events demonstrate that despite strong fundamentals the energy complex is still vulnerable. While we are again currently looking at a bearish October, one thing we can guarantee is that volatility will continue pre- and post- October 1st.

Jeremy Nicholson, Corporate Affairs Officer, discusses some of the factors in this article and what they mean for energy buyers with Wayne Bryan, Senior European Energy & Commodity Analyst. To stay current, you can subscribe to our regular market intelligence reports and briefings here.