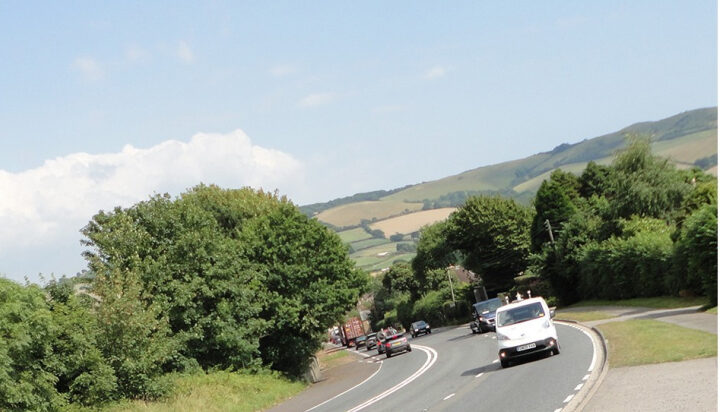 The emissions monitoring vehicle on the A35 at Chideock Hill. Image: Highways England

A 30mph speed restriction is set to be made permanent in the Dorset village of Chideock following the positive outcome of an air quality trial.

Highways England initiated a trial speed limit along a section of the A35 at the western end of the village in September 2019 after Chideock was identified as an Air Quality Management Area by Dorset Council.

The 18-month trial involved the installation of monitoring equipment, patrols by an emissions monitoring electric van and the temporary 30mph speed restriction.

Highways England found a “small reduction” in nitrogen dioxide levels after the speed limit was introduced and has proposed to make the restriction permanent.

Andy Roberts, Highways England Route Manager for the A35 said: “We have a responsibility to tackle pollution caused by vehicles using our network and we’re working in partnership with Dorset Council to improve air quality in Chideock.

“As part of our ongoing work, we undertook and completed a trial which saw additional diffusion tubes installed and an electric-powered van monitoring real-time pollution before and after the speed limit change.

“This identified a small reduction in nitrogen dioxide levels following the reduction of the speed limit and as a result of the localised air quality benefit, we propose to make the extended 30mph zone a permanent fixture.”

Highways England also installed an electric vehicle (EV) charging point in the village, which has been operational since December.

It will continue to work with Dorset Council on the preparation of its Air Quality Action Plan.