Protestors forced the company to cancel its annual meeting 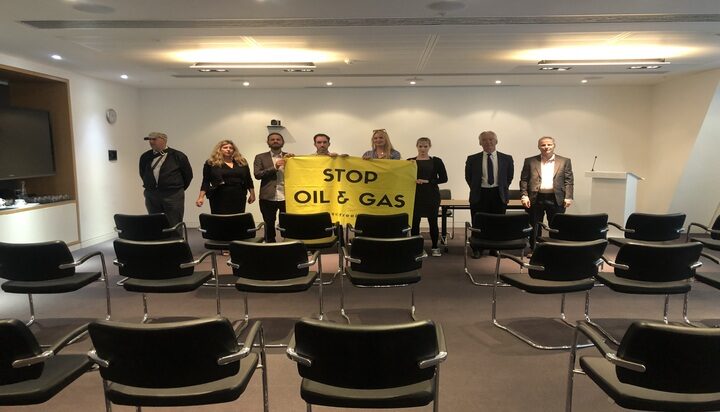 They read out messages about the urgency of stopping fossil fuel expansion and chanted “climate action cannot wait”.

A few days ago, ELN reported that the company was granted the green light to carry out exploratory drilling on a site in Surrey for a temporary period of three years.

Joanna Warrington, a spokeswoman for Fossil Free London, said: “The science is very clear: we have to end coal, oil and gas to have a shot at a safe and liveable future. But apparently, this government and UKOG did not get the memo.

“The UK government should be investing in clean, homegrown renewable energy and home insulation for our draughty homes. This would tackle the climate crisis and reduce people’s soaring energy bills.”

In a statement, the company said: “UKOG fully supports the democratic right to protest, but we object to our AGM being hijacked by a rowdy group of protestors who only wanted to shout their mantra which denies others the right to conduct their lawful business.”

In response to this statement, Robin Wells from Fossil Free London commented: “Our group showed incredible willingness to engage in open conversation, even after being physically attacked.

“The moment we stood up with a banner in peaceful protest at the UKOG one of our members was tackled by first one massive security guard, and then another. He was dragged, including at one point by his legs, leaving carpet burns and marks on his body.

“Another female member of the group was shoved repeatedly by a massive security guard who dwarfed her totally, for simply reading a statement. The executives were totally disengaged, non-apologetic and said nothing to stop the assaults. We reported both incidents to the police on site on the day of the AGM.”

ELN approached UKOG – the company did not respond before publication.