Whitehall has cuts its carbon emissions by 13.8%, beating the 10% target David Cameron set when the Coalition took office a year ago, he announced today. The Government estimates this […] 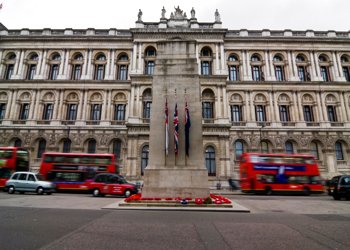 Whitehall has cuts its carbon emissions by 13.8%, beating the 10% target David Cameron set when the Coalition took office a year ago, he announced today.

The Government estimates this as an almost £13 million reduction in energy bills at Government HQs and offices.

But Energy Secretary Chris Huhne said this was only the start, and the Prime Minister told Whitehall it would have to go further by slashing a quarter of emissions by 2015.

Mr Cameron said: “A 13.8 per cent cut in emissions in just one year is a great result and the civil service should be very proud of this achievement. But to be the greenest government ever we need to do more to stamp out energy waste in Whitehall, and make it easier for people and business to use energy more efficiently. That’s why I’m committing the Government to go further by reducing emissions by 25 per cent by 2015.”