Carbon capture and storage (CCS) has changed “most radically” over the past year and the issue has now moved down the industry’s priority list says the World Energy Council. In […] 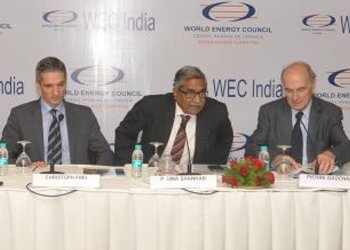 Carbon capture and storage (CCS) has changed “most radically” over the past year and the issue has now moved down the industry’s priority list says the World Energy Council.

In its  latest publication,  ‘2013 World Energy Issues Monitor’ which is an annual assessment of the issues impacting the global and regional energy sector, energy leaders believe that until there is clarity on the price of carbon, CCS will continue to be seen as an additional cost on energy.

Dr Christoph Frei (pictured on the left), Secretary General of the WEC and author of the report said: “The report is significant and clearly shows the insomnia issues keeping energy leaders awake at night. For me the most significant change is the way CCS is now being viewed with a clear tension between the desire of energy leaders for a climate framework and the lack of confidence in some mitigating technologies. This change in perception is of considerable concern as the success of new technologies like CCS will be critical if we are to achieve the massive transition required in the energy sector.”

Although a global picture, the report singled out Europe as a region least likely to adopt CCS.

The report also suggested continued uncertainty in climate frameworks, political instability and energy price volatility are also some of the issues holding back the transition of the global energy industry.

Although unconventional fossil fuels, including shale gas and oil, are considered to be game changers for the industry, the study found further action is needed to realise their potential. Renewable energy and energy efficiency are also areas that need to be looked into as they could contribute to diversity and security of supply as well as give access to the 1.3 billion people in the world who still don’t have access to energy.

The report was unveiled at the World Energy Leaders’ Summit in New Delhi, India, where more than 70 ministers and CEO’s from over 30 countries gathered to discuss the critical issues affecting the energy world.