Green groups were livid today as Prime Minister David Cameron announced the UK “can’t afford” to miss out on big bucks earned from fracking for shale gas. Campaigners said there […] 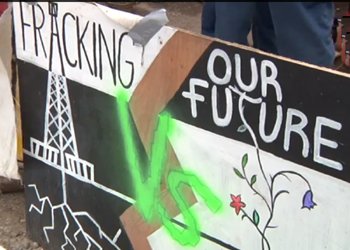 Campaigners said there were plenty of other sources of energy which could bring cash into the country’s coffers.

Andrew Pendleton Friends of the Earth’s Head of Campaigns said: “This country has some of the best renewable energy resources on the planet. The PM should stop over-hyping fracking and get on with the job of reaping the huge economic benefits of being at the forefront of a clean industrial revolution.”

Others bashed his argument that drilling for shale gas will cut British bills.

Greenpeace’s Energy Campaigner Leila Deen said: “Experts from Ofgem to Deutsche Bank to drilling company Cuadrilla itself agree UK shale will not bring down bills, because unlike the US, the UK is part of a huge European gas market.”

She warned the Conservative leader should think twice about shale gas, claiming it could lose his party votes: “We’ve seen that foisting fracking on communities – South or North – doesn’t work and his comments are likely to further stir rebellion in the Home Counties, not quell it.”