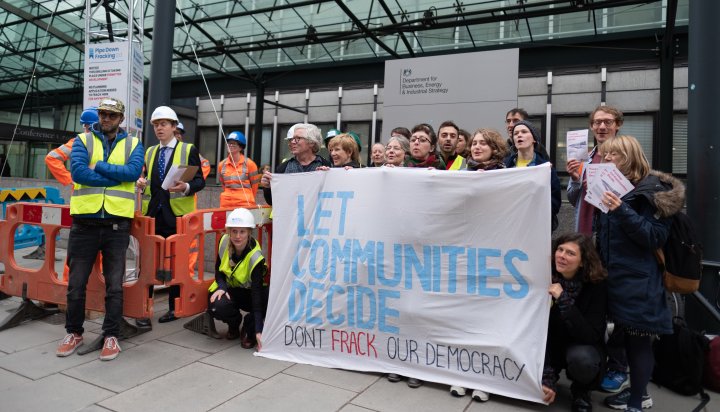 Green campaigners have erected a mock fracking rig as part of a protest outside the Department for Business, Energy and Industrial Strategy (BEIS).

Frack Off London say they oppose the ‘Permitted Development’ consultation, which they argue could potentially result in exploratory drilling taking place without local planning permission.

However, this consultation is not being managed by BEIS but instead by the Ministry of Housing, Communities and Local Government (MHCLG) – the fracking-related consultation hosted by BEIS is the Nationally Significant Infrastructure regime.

Campaigners claim the ‘Permitted Development’ consultation could mean permission is granted for companies to undertake exploratory drilling for shale gas under conditions originally designed for householders looking to make small changes to their domestic properties.

Lorraine Inglis of Frack Off London said: “The idea that these proposals could be used to force the hugely unpopular and highly contentious fracking industry onto communities is an outrageous affront to local democracy.

“These changes could result in the industrialisation of our countryside and it is crucial that local councils and communities have the final say on whether this polluting industry is allowed into their local area or not.”

Three anti-fracking activists have recently been jailed after they stopped a convoy of lorries with drilling equipment in Lancashire last year.

A government spokesperson said: “No one benefits from delays in planning decisions. That’s why we are committed to planning reforms to help ensure quicker decision making on shale applications.

“We are holding early stage consultation on the principle of whether non-hydraulic fracturing shale exploration development should be treated as permitted development, and this consultation is currently in process.”