Was Glastonbury such a plastic-free party after all?

This year, the iconic festival made the commitment to go entirely plastic free but the aftermath shows this may not have been as successful as initially hoped 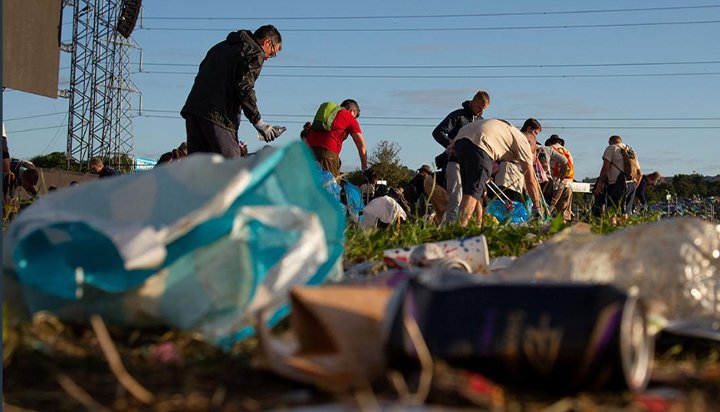 This year, Glastonbury Festival made the commitment to go entirely plastic free – but the aftermath of the iconic British event shows this may not have been as successful as initially hoped.

The festival at Worthy Farm hosted around 200,000 people over its five days and had the central theme of climate change and the environment.

Its official website called for attendees to “leave this beautiful countryside in the state that it deserves” and the Glastonbury Oath this year included the lines “I will use the recycling bins correctly and not drop litter on the ground”, as well as “I will bag up my rubbish in the bin bag”.

Despite organisers calling for attendees to “love the farm and leave no trace”, work has already begun to clear up piles of plastic bottles, shopping bags, tents and camping chairs left at the site –  it is expected to take as long as six weeks before this is complete.

In 2017, more than a million plastic drinks bottles were sold at the festival, with none being sold inside the festival this year – despite this success, many bottles were still brought in from elsewhere and left as litter.

The ban on single-use plastic was supported by Sir David Attenborough, who took to the Pyramid Stage in a surprise appearance to call on festival-goers to try and reduce their impact on the environment.

More than 1,300 volunteers are now using recycled plastic bags to collect the rubbish left on the fields.

Glastonbury Festival said: “Our recycling team have confirmed that we’ve seen a massive reduction in the amount of plastic on the site this year – the least they’ve ever seen, by a distance.

“It’s too early for us to have exact stats on how much plastic has been collected (note: there was never a ban on the public bringing their own plastic bottles on site this year) but we’re incredibly pleased that we didn’t sell any single-use plastic drinks bottles at Glastonbury 2019 after selling more than one million in 2017.”