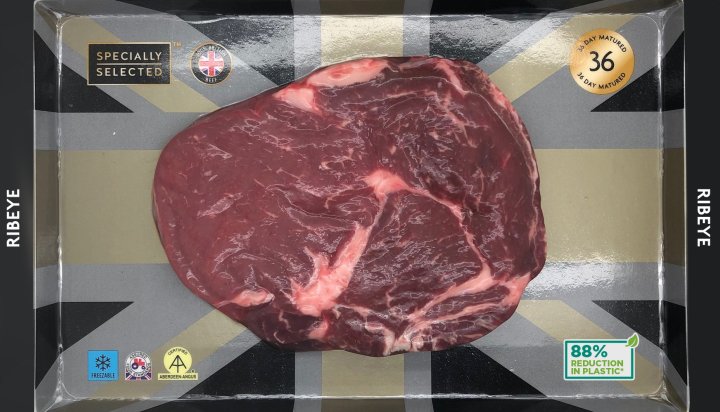 Aldi has announced a mission to kick plastic waste in the rump with new cardboard steak packets.

The supermarket is trialling more environmentally-friendly meat packaging in a move it claims could cut more than 240 tonnes of plastic use each year.

From September, it will sell steaks in recyclable cardboard trays instead of plastic across more than 380 of its UK stores.

The method still uses a thin plastic film but reduces the amount of of the material used by nearly 90%, without compromising shelf life and increasing food waste.

It says the idea could be implemented across the entire UK and could cover a wider range of dishes by next year.

The move will help the brand get closer to reaching its target of reducing plastic packaging usage by a quarter by the end of 2023.

Fritz Walleczek, Managing Director of Corporate Responsibility at Aldi UK, said: “Meat is almost universally sold in plastic, but we’re looking to lead the way with alternatives – including these new cardboard steak trays.

“Both food and plastic waste are important issues, but this packaging delivers on both by potentially removing 240 tonnes of plastic a year without compromising food quality or longevity.”