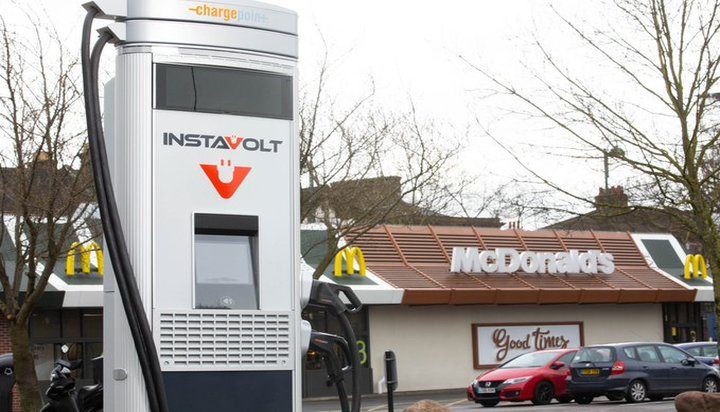 Hungry McDonald’s customers who pop into one of its drive-in branches, will soon have their electric vehicle (EV) rapidly charged while waiting for their fries.

This comes after a collaboration between the fast-food giant and InstaVolt. It will include the introduction of charging points at both new and existing drive-through restaurants.

The new rapid charging points are capable of charging at 125kW, amongst the fastest in the UK, which will help cut charging times for motorists.

McDonald’s says it aims to have more EV charging points on its premises than any other company in the UK and Ireland.

The partners claim the project will be ‘the first of its kind’ for a major UK restaurant chain and aims to increase the accessibility of rapid charging for drivers across the UK by providing a network of convenient locations beyond service stations, residential streets and workplaces.

Paul Pomroy, CEO, McDonald’s UK & Ireland, said: “With more than 1,300 restaurants, our ambition would mean you would never be far from a charging point. As we look toward a return to normal service post-Covid19, drivers will be able to pop in for a coffee or a meal and get an 80% charge in 20 minutes.”

Transport Minister Rachael Maclean said: “Being able to easily and quickly charge our electric cars as we go about our day-to-day lives is vital to encourage more people make the switch to electric.”

Adrian Keen, InstaVolt’s Chief Executive Officer, commented: “Research shows that drivers need to be confident that fast, reliable and simple to use charging infrastructure is never far away and this partnership will deliver that confidence to drivers nationwide.”

The first installations of the rapid EV charging infrastructure will be announced as soon as they become available.