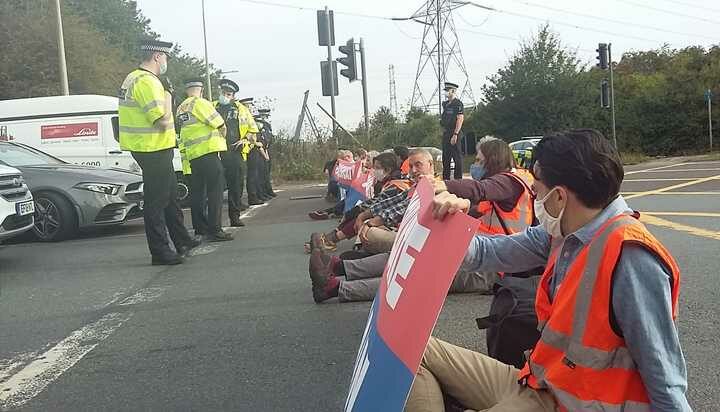 Hundreds of motorists were stuck in massive traffic jams at junctions of M25 early in the morning today, because of climate protests organised by the campaign group Insulate Britain.

The group staged the series of protests demanding that the government insulates every British home by 2025.

Because of the disruption, some drivers reportedly tried to drag some protestors off the blocked roads.

According to reports, nearly 30 activists were arrested on suspicion of highways obstruction.

Zoe Cohen, one of the Insulate Britain’s activists told ELN: “What we are highlighting is that we are in a code red climate emergency. What we need to see with this campaign we are demanding is for the government to insulate and retrofit all our homes in this country because it is the most effective way to spend money on decarbonisation.

“It’s a really efficient, cost-efficient thing to do. It takes millions of people out of fuel poverty because at the moment we have one-in-ten households having to choose between food and fuel.”

The government has already committed £1.3 billion to support energy efficiency measures. Ms Cohen said that is a “minuscule” amount.

In the meantime, several drivers took to Twitter to complain about the protest. The campaigner told ELN the action was bound to upset M25 commuters: “We want to apologise, we are very sorry that this is causing disruption. We don’t like doing it, but we honestly feel we have no choice. Politicians, unfortunately, don’t listen or take any action without causing any disruption.

“We are peacefully just sitting there in a very vulnerable way. We are using our bodies, because frankly, it’s all we have got left to protest with, everything else has been tried here.”

Essex Police said it has arrested twelve people after the M25 was blocked. The force received a call shortly before 8.15am today reporting a number of people were blocking the road near to Junction 31 for Lakeside.

Chief Inspector Paul Austin said: “This incident caused significant disruption and our officers worked to resolve it as quickly and safely as possible. I want to thank the drivers affected for their patience and understanding.”

Ms Cohen said she is not surprised about the arrests: “We expect the police to arrest us. We expect that as we are accountable for our actions, we are not trying to avoid arrest.”

The AA president, Edmund King, said: “This action is not only incredibly dangerous in potentially putting lives at risk but it also backfires in environmental terms by causing more delays and more vehicle emissions.

“These are some of the busiest sections of the M25 where tens of thousands of drivers will have been affected and has a negative knock-on effect on economic activity.”

A government spokesperson said: “People’s day-to-day lives should not be disrupted, especially on busy motorways where lives are put at risk and resulting traffic delays will only add to vehicle emissions.

“We are investing £1.3 billion this year alone to support people to install energy efficiency measures and our upcoming Heat and Buildings Strategy will set out how we decarbonise the nation’s homes in a way that is fair, practical and affordable.”