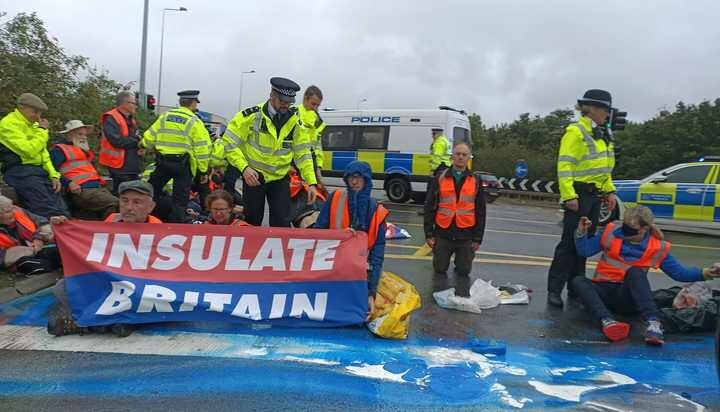 A group of 52 protesters who have participated in the previous motorway protests organised by Insulate Britain blocked the M25 again this morning.

This marks the sixth time in the last ten days, activists of Insulate Britain staged a protest targeting major roads.

The protest is a breach of the injunction granted by the High Court last Tuesday.

The court injunction was granted to National Highways to prevent people from obstructing Britain’s busiest highway.

According to the injunction, those involved “may be held to be in contempt of court and may be imprisoned, fined or have their assets seized.”

The Metropolitan Police confirmed it was “attending a protest at junction 14 of the M25” and “arrests are being made”.

It added: “Two lanes of traffic have been reopened as we continue to ease congestion. Some activists have used super glue to frustrate our response. We are working as quickly as possible to clear the roads and get people moving.”

Insulate Britain spokesperson Liam Norton said this morning: “You can throw as many injunctions at us as you like, but we are going nowhere. You can raid our savings and confiscate our property.

“You can deny us our liberty and put us behind bars. But that is only shooting the messenger. The truth is that this country is going to hell unless you take emergency action to stop putting carbon into the air.”

We're attending a protest at Junction 14 of the #M25 near Heathrow Airport where activists are blocking traffic on a slip road.

We are on scene and have opened one lane of the carriageway. Arrests are being made – we will share updates shortly.