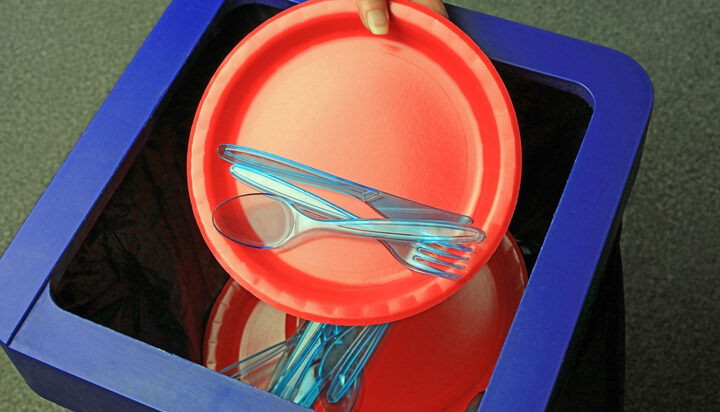 The government has today unveiled plans to ban single-use plastic plates, cutlery, food and beverage containers in a move that is dubbed the war on plastic.

That is part of public consultation, Environment Secretary George Eustice announced that also includes a separate call for evidence to ask views on tackling other sources of plastic waste, including wet wipes, tobacco filters and sachets.

According to estimates, England uses approximately 1.1 billion single-use plates and nearly 4.25 billion pieces of single-use cutlery every year – of them, just an estimated 10% are recycled.

Under the government proposals in a 12-week public consultation, businesses and consumers will need to move towards more sustainable alternatives.

Environment Secretary George Eustice said: “Plastic damages our environment and destroys wildlife. This government has waged war on unnecessary, wasteful plastics, banning the supply of plastic straws, stirrers and cotton buds, while our carrier bag charge has cut consumption by 95% in the main supermarkets.

“But it’s time we left our throwaway culture behind once and for all. Through our world-leading Environment Act, we will reduce waste and make better use of our resources, helping us to build back greener and leave the environment in a better state than we found it.”

A few days ago, Scotland announced a ban on plastic cutlery, plates, straws, drink stirrers, balloon sticks, food containers and cups made from polystyrene from 2022.

From 1st October last year, the ban on plastic straws, cotton buds and drink stirrers came into effect in the UK.

Starting from 21st May, the government increased the plastic bag charge to 10p as an additional measure to reduce the amount of plastic waste.