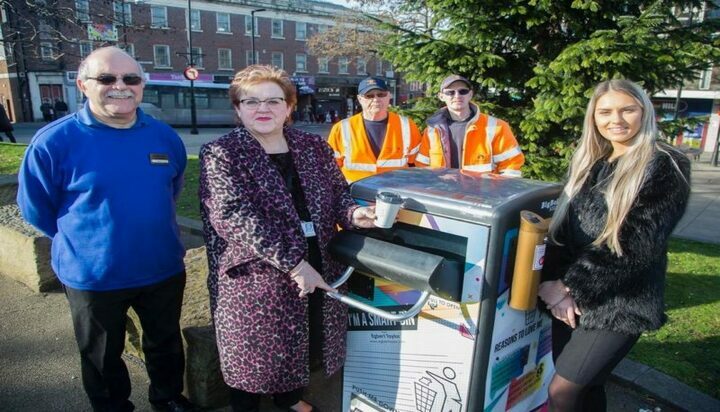 A “technical error” has led to “smart” bins’ failure to receive and manage properly the waste in Dinnington, near Rotherham, South Yorkshire.

It was reported that due to the malfunction, bins were left overflowing.

The bins are manufactured to emit a signal when they are full.

Each of these bins is fitted with a hydraulic ram, powered by the micro-solar panel to compact the waste inside the bin.

The installation of solar-powered litter bins was rolled out in the town centre as part of a trial by Rotherham Metropolitan Borough Council.

The bins are designed to contain up to eight times more waste than a regular litter bin.

Rotherham Council’s Acting Assistant Director of Community Safety and Street Scene, Sam Barstow, said the council had recently introduced solar-powered bins across the borough to compact waste and to send a signal when they are almost full, allowing staff to focus on other cleaning work.

The signal can be changed to alert staff if the bins needed to be emptied more frequently, such as on a busy high street.

He added: “We have installed 110 solar litter bins in the borough over the last couple of years and there has only been two occasions where the system has failed.

“On this occasion, a takeaway pizza box had been wedged in the opening of the bin making it appear as though it was overflowing to passers-by when it was only a quarter full.

“An error with the set-up of the staff member’s device for this bin meant he didn’t receive its signal to warn them that the bin flap remained open and this resulted in waste being left around the bin for a short period of time.

“Given Dinnington High Street has a high number of takeaways and shops, we have also reset the signal to alert us when the bins are 70% full rather than 90%, to avoid any potential overflow.”