“This is why I cut Liz Truss off” 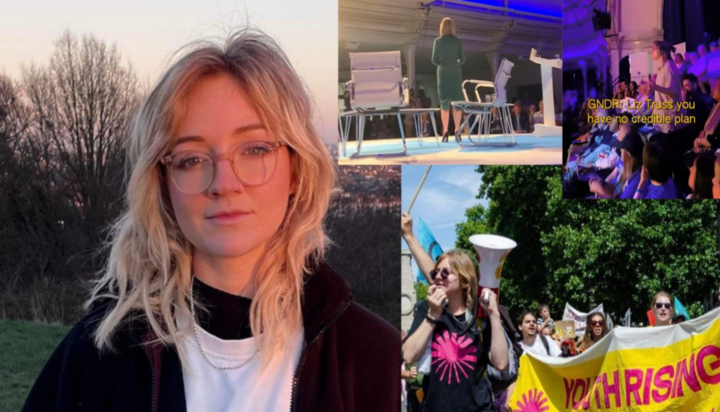 Liz Truss has been accused of setting out no future for tackling the climate crisis and the cost of living crisis.

The criticism comes from one of the climate activists who disrupted Liz Truss’ appearance at the Conservative leadership hustings on Friday at the Winter Garden theatre in Eastbourne.

Sarah Noles, an activist from youth group New Green Deal Rising spoke to ELN about the reasons behind this protest.

She said: “We are a group of young people watching the next leader of our country being elected. We want to feel hopeful about our future.

“We want to feel like we’re going to have a time where everyone is safe from harm and they can live a good life. And frankly, the vision that is being offered by these two leadership candidates and Liz Truss, in particular, are just completely inadequate.

“They do nothing to help ordinary people and are just setting out no future for tackling the climate crisis and the cost of living crisis.”

A few moments after interrupting proceedings, Ms Noles was removed from the event.

Mrs Truss responded by promising an immediate crackdown on militant protesters if she became Prime Minister. She said: “I would legislate immediately to make sure that we are standing up to militant trade unions who stop ordinary commuters getting into work. And I would legislate to protect our essential services.

“And I will make sure that militant activists such as Extinction Rebellion are not able to disrupt ordinary people who work hard, do the right thing and go into work.”

Asked about why she and her peers chose to target Liz Truss, Ms Noles said: “We can see that Liz Truss is leading in the polls and we think that it’s important that people know, if she is going to be the most likely Prime Minister, it is important that her record on this is put under the spotlight.”

Reports after the protest, cast doubt on the intentions of climate activist Ms Noles who has racked up thousands of air miles and had previously been seen on social media images sipping cocktails in Spain and going on safari in Tanzania.

Ms Noles responded: “I think there’s a complete misunderstanding of the problem. The problem of the climate crisis is not being driven by people going on holidays and doing volunteering trips and taking into training journeys.

“The climate crisis is being driven by a system that’s driven by profit and putting profit over the needs of people and the planet.”

ELN asked the Conservative Party and the parliamentary offices of Liz Truss and Rishi Sunak for a comment – they did not respond before publication.