Smoking BMW i8 gets submerged in water for 24 hours 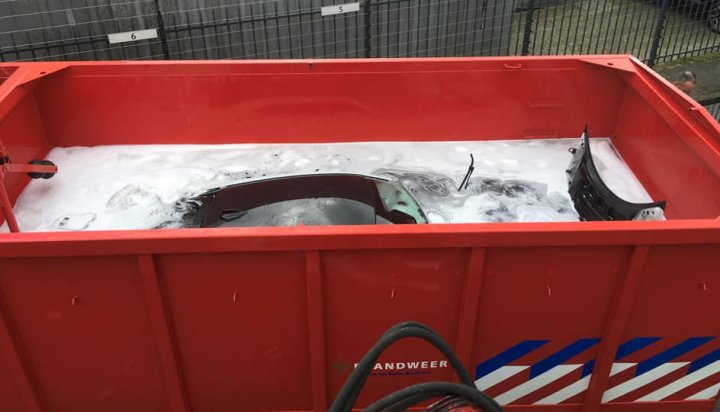 A fire brigade in the Netherlands was forced to dunk a burning BMW i8 in a giant tank of water after putting it out it the ‘normal’ way didn’t work.

The Brandweer Midden- en West-Brabant fire service posted a description and images of the incident on its Facebook page.

A translation explains the electric sports car started ‘smoking’ in a showroom before employees and the fire department quickly got the car outside and decided to immerse it in water, because “normal extinguishing in this car was difficult”.

It said this was because putting out an electric car fire requires a lot of water to be used, partly because the battery packs are difficult to reach and continue to burn for longer.

The department said it was more effective in this case to submerge the car and noted it also meant the unsafe substances produced by such a fire could be kept in the container and subsequently removed by a specialised company.

The low carbon vehicle was left in the tank for 24 hours to cool off.

A spokesperson from BMW said: “On Monday morning (25 March) smoke started to develop from a BMW i8 in the showroom of a BMW dealer. The car was not a customer car, but a demo that stood in the showroom. Fortunately, nobody was injured.

“Compliments for the BMW dealer employees who responded very adequately and pushed the car out of the showroom, also compliments for the fire brigade which was quickly on site and got the fire under control. The cause of the fire is not yet known. The battery has been dismantled and sent to BMW headquarters in Munich for further investigation.”