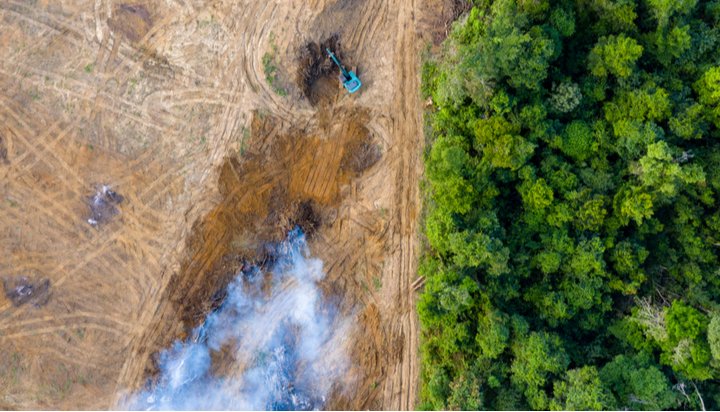 An area of forest twice the size of the UK has been cut down since 2010 to set up food plantations.

That’s the verdict from Greenpeace International, which claims unsustainable farms supply many of the world’s leading food companies.

It says despite a promise made in 2010 by the Consumer Goods Forum (CGF) members such as Nestlé, Mondelez and Unilever to end deforestation by 2020 through sourcing products such as cattle, palm oil and soya more sustainably, production of commodities linked to deforestation has continued to rise.

The organisation notes 80% of global deforestation is a direct result of agricultural production, releasing climate emissions equivalent to Japan, Germany and the UK combined.

Greenpeace says earlier this year it wrote to more than 50 companies asking them to disclose their commodity suppliers – it argues no company was able to demonstrate meaningful effort to end links to deforestation and notes none of the companies included animal feed in their deforestation reporting, even though around 90% of soya is used to feed animals to produce meat and dairy products.

It also highlights how despite palm oil giant Wilmar International committed to map and satellite monitor all of its suppliers, competitors such as Cargill, GAR and Musim Mas have not matched the promise.

Anna Jones, Global Project Lead for Forests at Greenpeace UK, said: “These companies are destroying our children’s future by driving us towards climate and ecological collapse.

“They’ve wasted a decade on half-measures and in that time vast areas of the natural world have been destroyed. They should be in crisis talks right now but they’re still trying to grow demand for products that will drive forest destruction even further.”

A spokesperson from the CGF said: “The CGF is aware of a recent report sent to media by Greenpeace.

“The report’s conclusion incorrectly notes that companies are unwilling to do what is needed; although the global consumer industry purchases only a small fraction of the commodities that are grown in tropical forests, our members are playing an important role in addressing these issues.”