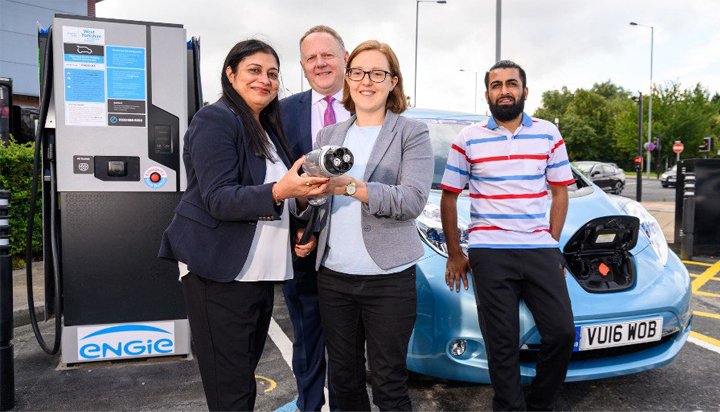 The first of 88 new rapid electric vehicle (EV) charging points in West Yorkshire has been switched on in Bradford.

It is located in Vicar Lane and is part of a £3.2 million scheme to help improve the county’s air quality.

Each of the new sites, which will be added every week, will have two bays and are free to use until the end of October 2021.

One of the charging points – which will typically take under an hour to provide a full charge – will be exclusively for taxis and private hire vehicles and the second for all other users.

The scheme is a collaboration between West Yorkshire Combined Authority and its partner local authorities – Bradford, Calderdale, Kirklees, Leeds and Wakefield Councils.

They are investing £1.2 million in the scheme and won £2 million from the government’s Office for Low Emission Vehicles (OLEV).

Cllr Manisha Kaushik, Deputy Chair of the West Yorkshire Combined Authority Transport Committee said: “Around 500 diesel taxis and private hire cars are forecast to be converted to hybrid and pure electric vehicles as a result of us rolling out these charge points.

“Plus, the increased availability of rapid charge point locations will help counter ‘range anxiety’, which is currently discouraging people from switching to electric vehicles.

French utility ENGIE has been appointed to install and operate the new charging points, which will provide 100% renewable power.