Every winter the term ‘security of supply’ comes to the fore. Sensationalist headlines start to appear questioning whether we will ‘keep the lights on’ or face ‘blackouts this winter’. 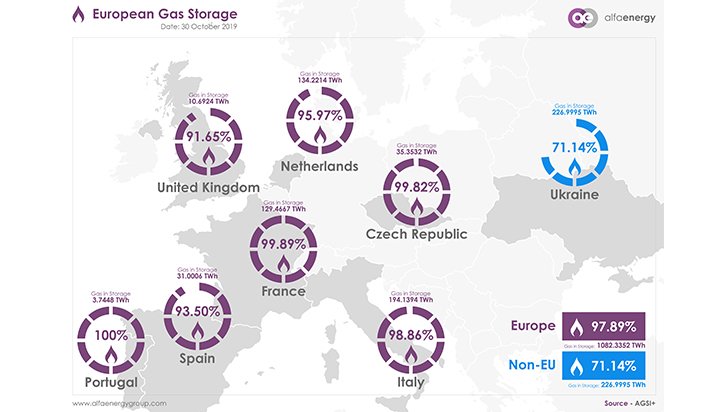 Security of supply – and scary headlines

Every winter the term ‘security of supply’ comes to the fore. Sensationalist headlines start to appear questioning whether we will ‘keep the lights on’ or face ‘blackouts this winter’. Anxiety is especially acute this year, so soon after the 9 August blackout which affected London and many parts of the UK. That event was caused by an offshore wind farm and a large gas power station going offline after a lightning strike, triggering a loss of 1.7GW in capacity at a time when only 1GW was available. National Grid took immediate measures to manage the situation but over a million customers were affected and it took more than two hours before normal supply was completely restored.

Concerns have also been heightened by the continuing uncertainty over Brexit, since the UK is a net importer of energy and connected to Europe through several gas and power interconnectors. This has led some to ask whether the UK could be ‘disconnected’ from European gas and power markets in the event of a hard Brexit.

Consumers should be reassured by the fact that European markets are also reliant, to a certain degree, on imported gas and power from the UK, so there is a strong mutual interest in ensuring there is no disruption to trade across the interconnectors. Nevertheless, National Grid still carried out a threat assessment ahead of this winter in order to assuage concerns. The results were encouraging – even in the event of no interconnector availability the UK would still have adequate supply options to ensure demand is met in a 1 in 20 cold weather scenario. These include accessing the international LNG market which at present is in a state of oversupply as global supply finally outstrips demand.

On 30 October the UK’s throughput of LNG reached 110mcm/d – a level not observed since 2011. To put that figure into context, forecast demand at the time was 273 mcm/d. Such a send out was required to make room for a further ten cargoes currently en route to the UK’s three LNG terminals.

National Grid also forecast that demand for gas for power generation will fall to a four-year low as renewable generation capacity, which is already 30% / 8GW higher than 2016, continues to grow.

In further good news for security of electricity supplies, the GB capacity market has recently been reinstated after the European Commission concluded its investigations and cleared the scheme to continue, which will help ensure adequate levels of reserve capacity in future. The first capacity auctions will begin in January 2020.

With coal fired generation falling and soon to be phased out in the UK, and beginning a staggered phase out across Europe, gas fired generation will remain an important part of the energy mix. Gas generally provides between 30-60%`of UK electricity dependant on demand, wind/solar levels and nuclear availability. Gas price risks are also a concern for power markets, although fortunately this winter the supply outlook looks sufficient (see previous article).

Getting Russian gas to Europe

The biggest current concern is the trilateral gas talks between Russia and Ukraine, mediated by the EU. Around 30% of European gas supply comes from Russia via Ukraine, and the existing ten-year transit deal expires on 31 December. There have been two rounds of talks so far but a deal has not yet been agreed despite the EU encouraging a speedy conclusion. Gazprom and Natfogaz both have plenty lose if this deal is not concluded, but there is political history between the two countries and Gazprom is currently building two pipelines to bypass Ukraine. A potential agreement is being held up by a $2.6 billion dollar settlement due to Natfogaz from Gazprom, and disputes about transit fees and contract length (the EU is proposing ten years, Gazprom is looking for something shorter).

A short-term agreement would be in everyone’s best interests. Ukraine would not lose out on its c.$1bn in annual transit fees, Gazprom would not see its profits impacted or more importantly cede market share to Norway and US LNG, nor would it tarnish its reputation as a dependable gas supplier to Europe. The next round of talks is scheduled for mid-November. Most see this going till the last minute as both countries vie to get the best deal.

If no agreement is in place, there will still be a risk of gas price spikes this winter despite Ukrainian and European gas storage being at record highs and supplies of LNG being plentiful. Although the UK does not directly import Russian gas, our exposure to European gas markets could see us paying a huge premium to attract enough imports. Any gas price spike would inevitably feed into UK power prices.

Most analysts expect a deal between Russia and Ukraine will be reached eventually. But until it is, customers on flexible contracts should be mindful that price risk will remain on the table.

Need to know more? Listen to Alfa Energy’s Podcast, Good News on Gas here and scroll to the Podcast section.

Jeremy Nicholson, Corporate Affairs Officer, discusses some of the factors in this article and what they mean for energy buyers with Wayne Bryan, Senior European Energy & Commodity Analyst. To stay current, you can subscribe to our regular market intelligence reports and briefings here.