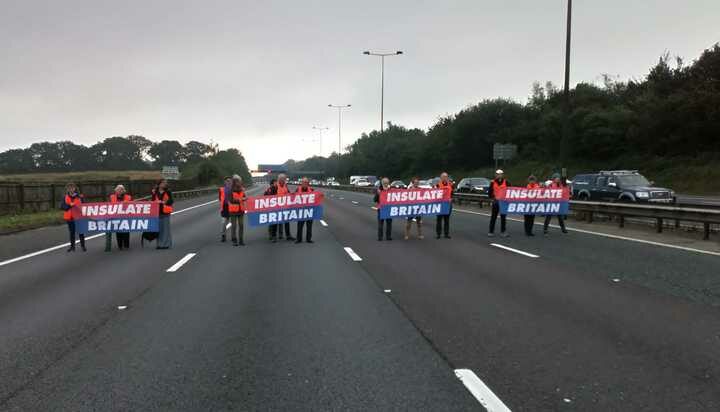 Two days after their latest protest that caused massive disruption across several junctions of the M25, climate activists returned today for their second phase of demonstrations.

Nearly 89 protestors, all members of pressure group Insulate Britain, blocked roundabouts and a carriageway on the M25 early this morning.

The campaign group said actions will continue until the government commits to insulate every British home by 2025.

Cameron Ford, one of the activists that took part in the protest, told ELN: “We’re trying to encourage the government to take the action that is necessary for insulating the homes of Britain. We have a large number of homes across the UK that are not to standard. Compared with most Western European countries we’re well behind.”

Mr Ford, a carpenter from Cambridge added: “We know how to insulate homes, reducing carbon emissions in this way needs no new technology. It will create thousands of proper jobs and it’s a really quick way to start reducing our carbon emissions.

“So, we’re trying to hold the government to account to do that. Unfortunately, in a house that only really talks about the economy, we have to disrupt the economy because that’s the language they speak. We don’t want to be here, we have jobs we also have to get to, but we’re choosing to be here because we’re in absolute fear. This year has shown that our carbon is too high so we’ve just got to reduce it right away.”

In a statement, Surrey Police said: “We have now arrested 15 people in connection with this incident. A number of protesters from Insulate Britain and Extinction Rebellion are at the two locations (Junction 8 and 10 of the M25) and appropriate diversions are being set up with the help of partner agencies.”