The project, the first of a £1 billion nationwide network of electric forecourts, is planned to open before the end of the year 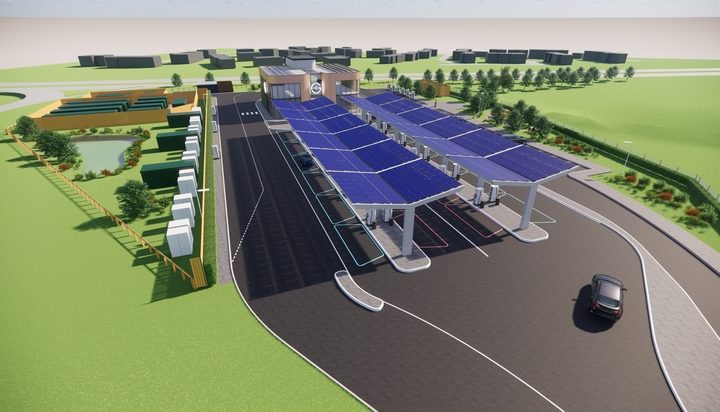 The first in a £1 billion nationwide network of more than 100 electric forecourts is in the final stages of construction, opening in Braintree, Essex, this November.

The facility is thought to be ‘UK’s first’ custom-built charging station and will charge up to 30 electric vehicles (EVs) simultaneously at speeds of up to 350kW – this is considered to be amongst the fastest commercially available in the UK.

It will offer around 200 miles of charge in as little as 20 minutes and will be powered by 100% renewable energy.

The charging park, which is developed by the tech-enabled sustainable energy firm GRIDSERVE, will accommodate a coffee shop, supermarket, and airport-style lounge aiming to make EV charging as simple and convenient as using petrol stations.

The company, which has secured 100 sites on busy routes and near powerful grid connections close to towns, cities and major transport hubs, aims to have the full UK-wide network operational within five years.

Toddington Harper, Founder and CEO of GRIDSERVE, said: “Our UK-wide network of over 100 customer-focused Electric Forecourts will eliminate range and charging anxiety by making it easier and cheaper to charge an electric vehicle than to fuel a petrol or diesel alternative.

“The UK’s first Electric Forecourt, represents so much more than an electric equivalent of a modern petrol station – it will deliver a fully loaded customer experience, offering the ‘Best of British’ retail and customer service to cater for a full range of consumer and driver needs.”