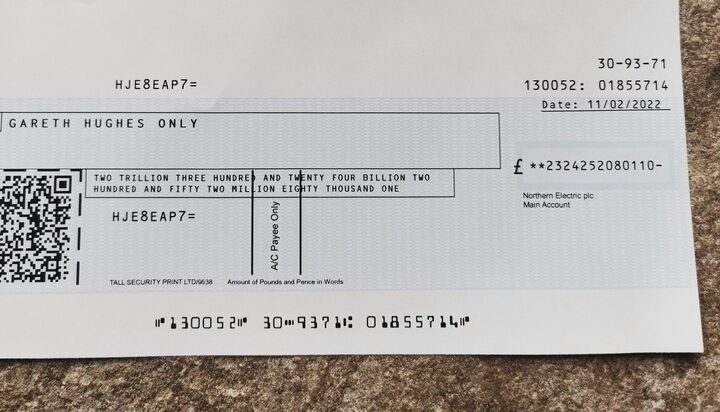 An accountant from Hebden Bridge, West Yorkshire received a cheque of more than 2,324,000,000,000 from Northern Powergrid as compensation for the power cuts his family experienced during Storm Arwen last November.

Gareth Hughes wrote a tweet that has since gone viral, being shared by thousands of people.

He wrote: “Thank you for our compensation payment, Northern Powergrid for the several days we were without power following Storm Arwen.

“Before I bank the cheque, however, are you 100% certain you can afford this?”

Speaking on ELN, Mr Hughes said: “I just laughed when I saw the cheque. It was clearly an error, but nice to dream for a minute or two.”

He said his home remained without power from 4am on 27th November to 5pm on 30th.

Since then, Northern Powergrid promised to pay tens of thousands of pounds to customers hit by days of outages.

Gareth Hughes added: “The company did contact me this afternoon (Sunday), however, it was a generic phone call to apologise about the cheque error.

“I know a number of neighbours had the same call yesterday.”

Thank you for our compensation payment @Northpowergrid for the several days we were without power following #stormarwen Before I bank the cheque however, are you 100% certain you can afford this? #trillionpounds pic.twitter.com/z5MNc2Nxl1

Gareth was just one of the 74 customers who received these compensation cheques for trillions of pounds.

In the aftermath of the storm, a Conservative MP said the way Northern Powergrid responded to the Storm Arwen was a “total disgrace”.

A Northern Powergrid spokeswoman told ELN: “As soon as we identified the clerical error, which was caused by the electricity meter reference number being incorrectly quoted as the payment sum, we ensured all 74 customers’ cheques were stopped so they could not be cashed.

“We have been investigating how this error happened and carrying out checks of previous payments. All indications are that this was an isolated incident and we have taken appropriate steps to ensure that this does not reoccur.

“We thank those customers who were honest and contacted us and we have been making contact directly over the weekend with all 74 customers affected to make them aware, apologise for the error and reassure them that a correct payment will be issued to them on Monday.” 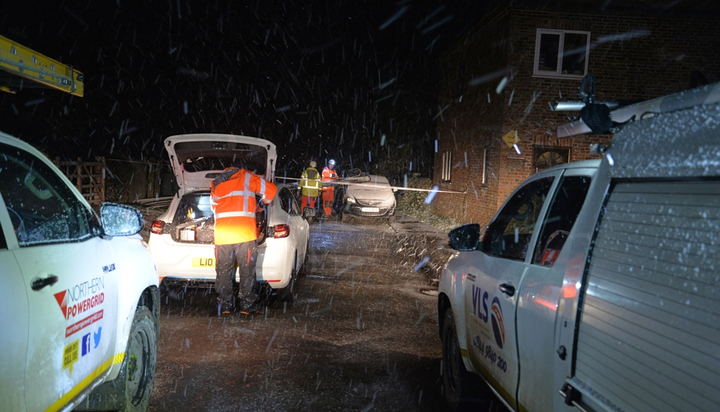