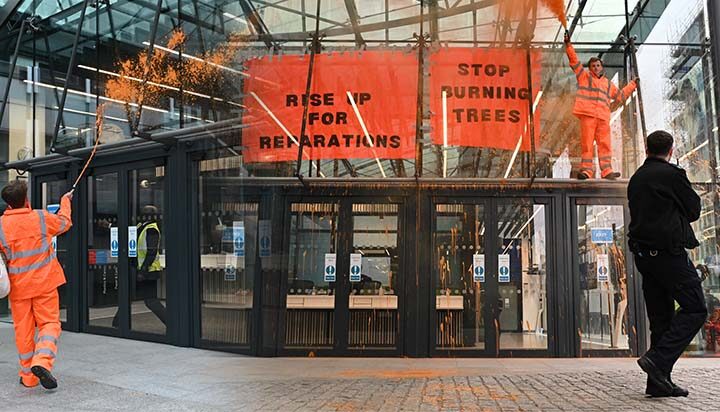 A government building was covered in orange paint as part of a protest by an environmental campaign group against energy giant Drax.

It comes just two weeks after Extinction Rebellion‘s campaigners glued themselves to the walls of the same building.

The protest is part of a series of other demonstrations against Drax Group on the day of the company’s annual general meeting.

Campaigners gathered in Liverpool, Leeds, York, Hull and outside Drax’s AGM in London to protest against the government’s support for the Drax biomass power station.

The person who doused the department building in paint said: “The criminal injustice of Drax fills me with despair and needs to stop.

“Drax power station is accelerating the climate crises, whilst being labelled as the solution, costing taxpayers in their energy bills and is in court with the HSE for their work conditions.”

A few days ago, it was reported that Drax earned £893 million in government subsidies for burning forest biomass last year.

A BEIS spokesperson told ELN: “People’s day-to-day lives should not be disrupted and any criminal activity will not be tolerated.

“Sustainable biomass is considered a renewable, low carbon energy source and forms a key part of our plan to strengthen Britain’s energy security.”

A Drax spokesperson told ELN: “Converting Drax Power Station in North Yorkshire to use sustainable biomass has transformed it into the UK’s largest producer of secure, renewable power.

“Drax does not cut down trees. Our pellets are produced from the waste material that is left behind from the construction and furniture making industries, such as sawdust from sawmills, off-cuts, tree-tops and smaller, diseased, or misshapen trees that have little commercial value and thinnings.

“If we didn’t take this material, it would mostly be sent for disposal, burned by the side of the road, or left to rot on the forest floor.”