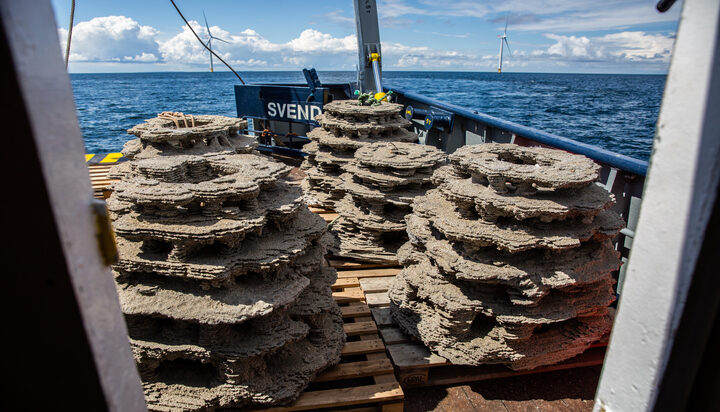 A dozen 3D-printed reefs will try to give an answer to the question “where did all the cod go?”.

Ørsted and WWF have deployed 12 3D-printed reef structures on the seabed between the wind turbines at Anholt Offshore Wind Farm in Kattegat, Denmark to see if they could increase cod numbers in the area.

It has been reported that overfishing, increasing oxygen depletion and habitat loss have resulted in a decline in the cod stock in the Kattegat for the past 20 years.

But why is cod important for the climate and ocean biodiversity?

Cod is considered an important predator, meaning it preys on other marine species and in this way contributes to maintaining the balance in the marine ecosystem.

When cod gets greatly reduced in numbers, the abundance of their prey, including the green crab will grow.

As a result, seagrasses decline because the crabs eat both the seeds of the eelgrass.

This is a problem, as eelgrass provides an important habitat for marine life, produces oxygen and it stabilises the seabed.

It also stores carbon, preventing it from being released into the atmosphere.

Bo Øksnebjerg, Secretary-General, WWF Denmark, said: ”Marine biodiversity in Denmark is under heavy pressure, and today there are 90 % fewer cod in the Kattegat than in 1990.

“Action is needed – and urgently. We must give nature and wildlife a hand, while trying to solve our climate crisis by expanding our renewable energy production at the same time.”